4 Forgotten Towns that Sunk Under Water

4 Forgotten Towns that Sunk Under Water

There are places on Earth that were once thriving and prosperous towns but because of forces of nature now are ghost towns. Atlantis is maybe the most well-known lost city that was said to be drowned in the deepest trenches of the ocean and never to be found. There is also Pompeii, an ancient Roman city that was unluckily buried in volcanic ash and pumice because of Mount Vesuvius’ eruption. And there are also some places that are not as popular but has its own bittersweet story to tell of its drowning, so read through and find out more about our top 4 sunken towns.

VILLA EPECUEN, ARGENTINA
Some 35 years ago, this spa town of Argentina was popular with local tourists. Lake Epecuen was once famous because of its salinity, second only to Dead Sea. The mineral-rich water of the lake is what drove people with different kinds of ailments because it is said that the healing property can cure any illness. What thought to be just temporary flooding became a permanent one with over 10-meter deep salty water covering the whole town. But after 25 years the flooding slowly receded exposing an old dead town of pure salt.

GRAUN, ITALY
A lonesome belfry can be seen in the middle of the vast waters of Lake Resia, a lone reminder of the old Italian village of Graun. Legend tells of a bell ringing in the dead of the night during winter a nostalgic memory for this drowned town. The flooding was a result of an electric company wanting to harness more energy by combining 2 big lakes, thus creating the dam by drowning the village under it. During winter the water on the lake freezes and you can walk your way going to the bell tower for an up close inspection. 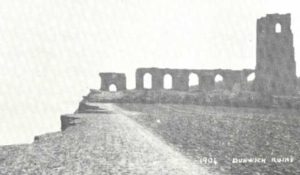 The wrath of the sea is something to be aware of and taken seriously because it can take anything that it deems interesting. This seems true with the town of Dunwich which was once a bustling port city in the borders of the North Sea. Coastal erosion took more than it should have including a market square, guildhalls, churches and graveyard. Today only a very small part of the town remains, but also has the fear of slowly disappearing underneath the raging sea waters.

JAH MAHAL, INDIA
Jah Mahal means “Water Palace” and its name is well fitting since it lies majestically in the man-made Lake Man Sagar. Its red sandstone outdoor walls is a beautiful contrast against the blue waters of the lake. This 5-storey hunting lodge, with the 4 lower floors submerged, seems to be a floating palace especially at night where the lights are turned on for a more dramatic effect. The submersion is a result of a dam created when the region experienced severe drought.