Puerto Vallarta sits pretty along the vast shoreline of the Bahia de Bandera, one of the world’s largest bays. Set against verdant coastal mountains, you couldn’t ask for better scenery for strolls along downtown’s emblematic boardwalk or the Koala River. Most of the action centers on the cobblestone historic center, where the Koala River dramatically splits this former fishing town into two distinct neighborhoods.

The Zona Romantica south of the Koala River is lined with boutiques, intimate restaurants, and laid-back bars. It is also home to one of Mexico’s most vibrant gay zones. Here on Vallarta’s southernmost end many hotels and nightclubs fly the rainbow banner.

There are only two beaches at the city center, including the bustling Playa de los Muertos aka the Beach of the Dead. It was named after a fierce fight that took place here in the 19th century. North of the quail, you can shop till you drop at art galleries and crafts stores or marvel at the Voladores or flyers performing their dizzying pre-Hispanic ritual. The Nuestra Senora de Guadalupe Cathedral wearing a jaunty crown atop its steeple stands guard over Puerto Vallarta. Built in the early 20th century, it is named after the country’s patron saint. 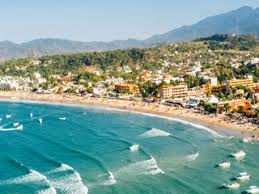 Vallarta’s famous boardwalk is lined with public sculptures by renowned artists such as Carlos Espino and Alejandro Colunga. The quirkiest of them are Colunga’s sculptures of six mutant alien sea creatures. Come nightfall, get things started in the Zona Centro with some beers at la Cantina, a traditional Mexican watering hole. Then move on to Mandala, a roaring nightclub where you can shake your stuff to electronic.

Marina Vallarta is one of Mexico’s largest harbors. Its waterfront restaurants serve up international cuisine and the Faro lighthouse bar has long been a magnet for Mexican celebrities. Exploring beyond Vallarta’s city limits pays big rewards, Bucerias, north along the coast is a no worries beach community with cozy hotels and a smattering of drinking halls.

Majahuitas, a remote beach cove is only accessible by boat. A quick walk through the lush jungle leads to the Majahuita Waterfall. Then there’s the ocean itself, the Bahia de Bandera offers some of the best dive sites in Mexico. The iconic rock formations at Los Arcos are a strong draw for divers as well as weekend booze cruises. You can also hop on a fishing charter, head out into the deep Pacific, and try to reel in a prize catch. Boredom is simply not an option here.